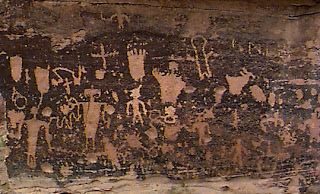 
Ant People Afternote: When I finished writing this I wanted an image to accompany the Monthly Visions, so as you do I googled 'Ant People'. The pic I used is from http://www.viewzone.com/antpeople.html The Anthills of Orion: Ancient Star Beings of the Hopi by Gary A. David (published by Atlantis Rising, # 48, Nov./Dec. 2004 under the title The Ant People of Orion ®).
The following excerpt stood out: “The Hopi word for ant is anu. In the same language naki means friend, prayer feathers, food offerings, or sand--a nexus of concepts pertaining to this insect that sometimes flies. A combination of the two words (anu-naki, or "ant friend") may be related to Sitchin’s Anunnaki. The Babylonian sky god was also named Anu.” Excerpt from The Orion Zone: Ancient Star Cities of the American Southwest Copyright © 2006 by Gary A. David. All rights reserved.
(c) Dana Mrkich 2010. Permission is granted to share this article freely on the condition that the author is credited, and the URL www.danamrkich.com is included
Posted by Dana Mrkich - Visioning the Dream Awake at 7:57 pm