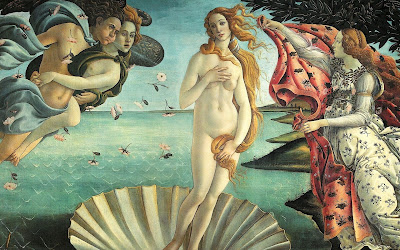 The Birth of Venus, Sandro Botticelli

Today Venus enters the territory over which she will retrograde as of July 25, heralding the start of the 'Venus shadow' period. Venus Retrogrades happen just under every couple of years, and offer a fabulous opportunity to review, reshuffle, rewire, heal, clear and transform all that is Venusy: love, relationships, self-love, self-value, self-worth, our inner feminine qualities, how we view ourselves and others as women (both individually and collectively), our ability to receive nourishment, nurturing and pleasure, and express ourselves creatively.

Venus is most commonly associated with love, but really she stands for the Feminine, which ultimately affects everything from our relationships to our income, abundance, health, happiness and heart fulfillment.

The simplest way of looking at how a Retrograde phase works, including its Shadow periods, is: Let's say you are driving from San Diego up to San Francisco. You pass through LA but a couple hours later in Santa Barbara you realise you forgot something in LA! So you head back there, pick up what you need, and resume your drive up the coast. Eventually you cruise past the spot in Santa Barbara where you had to turn around, and then it's into fresh new territory from then on!

So the patch of road between LA and Santa Barbara is one you will end up driving on three times: heading up the first time, reversing to get your forgotten stuff, and then heading up again. These 3 drives represent the Pre-retrograde Shadow, the Retrograde phase itself, and finally the Post-retrograde Shadow.

Most people know about the Santa Barbara back to LA part of a retrograde, but don't know about factoring in the two Shadow periods to help understand life changes and inner shifts during this time.
Today Venus is at 14 degrees Leo, let's call this spot LA. She will travel up to 0 Degrees Virgo, let's call that spot Santa Barbara. She retrogrades on that spot on July 25 and back she goes.

On 6 Sep she reaches LA (14 degrees Leo), goes direct, and on 9 October she clears Santa Barbara after reaching to 0 Degrees Virgo again, officially marking the end of her Shadow period.

Dates for your Diary:

How this will affect you will depend on a) where 14 Degrees Leo - 0 Degrees Virgo is in your Astro Natal Chart. (You can view that for free at astro.com) and b) what is most needing to clear/shift/transform/awaken within you at this time Feminine Energy wise.

A lot of relationships tend to go through a review phase at this time, and ex-loves may make an appearance. Rather than look at this as being purely about those relationships the bigger picture is about: what are these relationships/people/dynamics/patterns you've held trying to bring to your awareness about your own Self?

As your Feminine shifts so too will the way you perceive yourself, including your awareness around what you have accepted for far too long (be it re relationships, income, people treating you less than you deserve, over-giving, under-receiving etc). With that may come some grief, sadness, anger or self-blame which is good to acknowledge and release but no need to get stuck in those emotions. The real gold lies in what is wanting to emerge from underneath those emotions: your emerging, strong, passionate, creative, worthy, valuable Feminine Energy. This affects both men and women.

Pay attention to any themes that come up over these three periods as they will most definitely have a message for you!

If you want to use this time to shift any relationship issues that have been or are a pattern for you, then check out my Let Love In Online Course here.

Feel free to share this post, keeping the link to this page. Thank you as always for the great comments and insights that get shared here.

Posted by Dana Mrkich - Visioning the Dream Awake at 3:39 am